Because these stories are so short and closely related, I decided to do a double review for them, so that they might be properly compared and discussed without the headache of switching back and forth between two different posts.

Metamorphosis is one of Kafka’s best-known works, and more than likely ahead of its time.  Gregor Samsa wakes up one morning to find that he has turned into a giant cockroach but seems to be more concerned that he is running late for work.

He’s a traveling salesman that works ungodly hours to support his parents and sister, as his father’s business has gone bankrupt.  Day after day, he gives his 100 percent all for a complete dick of a boss who is convinced Gregor is trying to scam him anytime Gregor calls in sick or is even slightly late for work.  Yeah.. sounds like a great life you live there, Gregor.

Getting back to the whole “giant cockroach’ thing,  Only worried that he is running late for work, he scrambles out of bed and dismisses his new form as a dream.  Once his family realizes what he has become, they are angered and disgusted by him; and violently force him back into his room, where he stays.  Only his sister cares for him by feeding him and trying to keep his quarters clean, but it eventually even becomes too much for her and her disgust over him takes priority over her sisterly love.

To the point, the whole story is just sad.  This guy’s family has become so comfortable with Gregor to taking care of everything, that they expect it. They refuse to work and contribute in any way and even stash away money in their own savings (the father) that Gregor doesn’t discover until after he has turned into a cockroach. They expect more from Gregor than he can give, and Gregor’s boss is clearly no better.

As an insect, Gregor can no longer work and must now rely on the mercy of his family to keep him alive.  His mother, father, and sister must soon find work so that they can continue to make the bills and Gregor is left wondering why they didn’t help him more to begin with.  Unfortunately, he is not treated with the same love and care that he once showed his family and the story ends tragically for him, while his family move on and start their new lives as self-sufficient people.

I couldn’t help but conclude as I read this story that it was Gregor’s overstressed lifestyle that made him transform, and the cockroach is more of a symbol of how society sees and treats people who cannot take care of themselves.  But the interesting part here is that his family that seem to be the real roaches, and unfortunately Gregor works himself to the point of losing his humanity entirely.  I think this story sends a strong message and it can be interpreted in so many different ways.  It is one of my personal favorite classics! 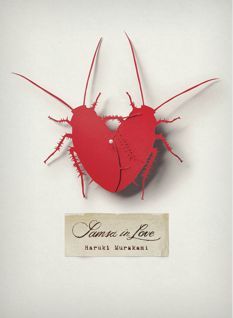 Moving on to what I like to call a fan-fiction is Haruki Murakami’s Samsa in Love. Kafka’s influence can be found subtly embedded in Murakami’s writing style, and he has never shied away from the fandom. Such examples can be found in Murakami’s novel titled, Kafka on Shore.  Murakami is one of my favorite author’s and for me to give him anything less than 4 stars is rare, but this particular piece he wrote for The New Yorker in 2013 seemed lacking.

I’m not going to say that I didn’t enjoy it at all, it just didn’t speak to me in a way that I felt was overwhelmingly clever.  Samsa in Love is, to the point, Metamorphasis reversed.  Instead of a man waking up to find that he has turned into a cockroach, a cockroach wakes up to find that he has turned into a man named Gregor Samsa.  The setting of this one takes place in military-occupied Prague.  He wakes up in an empty room, naked and hungry; but must learn how to operate his new body before he can soothe his hunger.  The house has a hot-and-ready made breakfast made, but no one is there, suggesting they all left in a hurry.  The invasion more than likely has something to do with this, but it’s never confirmed.  A hunchback lady who was called to repair a broken lock knocks on the door and Gregor answers.  Her movements whenever she adjusts her brassiere remind him of an insect and he sees that he is sexually aroused by it.  That’s… it.  Really.  There’s not too much more for me to say about this one.

Metamorphosis is the better of the two, hands down. Samsa in Love, on the other hand, is a fun little story that might be fun to read in an airport terminal, but any hidden meaning that might be found has completely escaped me.